You are here: Home / 528 Hz: History, Research, Benefits
The 528 Hz frequency is the most significant of the Solfeggio Frequencies. Known as the “love” frequency and “miracle note”, it has a deep-rooted relationship with nature. It is present in everything from Chlorophyll to human DNA. It also has mathematical significance and proven healing potential.

While the other ancient scale notes are certainly significant, Dr. Leonard Horowitz notes that 528 Hz is central to everything in the universe and the “musical, mathematical matrix of creation”. This includes the air we breathe, the water we drink, the grass beneath our feet, and the sun’s rays on our face. (1)

Its vibrations connect and resonate with everything within us and around us, on both a material and spiritual level.

When Dr. Joseph Puleo researched the Latin meanings of the ancient “Mi” tone, 528 Hz, he found it described as:

Perhaps that’s why the priests and healers of the most advanced civilizations of the ancient world were known to use 528 Hz to heal, bless, and manifest miracles.

So it begs the question: Could 528 Hz create positive effects in your life and the lives of those you love, from the tiniest building blocks of your biology to the highest levels of your consciousness? 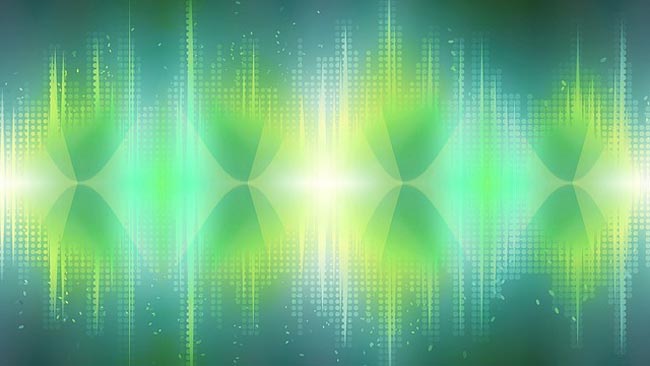 528 Hz is a special frequency that is found in many areas of the natural world. It is said be linked to, and able to influence, our DNA.

528 Hz & Its Relationship to Nature

Everywhere we turn in nature, we find 528 Hz.

Chlorophyll, which helps plants draw energy from light and gives them their green color, vibrates at 528 Hz (2).

The bees that pollinate many of these plants buzz around at 528 Hz. And the rainbow that completes this picturesque scene has 528 Hz at its heart as well, as it refracts the same greenish-yellow light found in chlorophyll.

Grass is green with LOVE/528. That is why chlorophyll is the most powerful healing pigment in biology. It's why people and animals eat grass to regain health, and why the air you breathe–the ‘prana’ of life, or the ‘chi’ in oriental medicine, is filled with the holy aloha spirit of LOVE. It vibrates in 528, sending spiritual signals for sustenance through your blood, restoring and invigorating every strand of DNA and cell in your body.

Yes, the air we breathe also contains 528. We now know that oxygen, for instance, carries these 528-resonating electrons. The basic structure of organic chemistry, the Carbon-6 hexagonal ring, reflects the sacred geometry of 528Hz frequency.

But the frequency’s significance in the natural world isn’t limited to this planet.

In fact, when recordings of the sun made by NASA scientists are compared to a tuning fork, we find 528 Hz there as well, at the heart of the star which is the center of our solar system (3).

In 2010, there was a disaster at an oil rig owned by BP called the Deepwater Horizon, causing it to leak millions of barrels worth of oil into the Gulf of Mexico (4).

An electromagnetic energy expert, John Hutchinson of Vancouver, along with his wife and research partner, Nancy Hutchinson, decided to do something to help.

They placed a device that emits frequencies on the beach, about 25 feet from the water, and used 528 Hz and other Solfeggio frequencies to treat the water.

They only did this for four hours, but the water in the area they had treated had miraculously cleared by the next morning.

In fact, the water had so improved that dolphins, fish, and crabs returned to the area, when just a day before those same waters would have been lethal for marine life (5).

Of course, such an incredible story as John and Nancy Hutchinson’s experiment in the Gulf of Mexico is sure to attract skepticism.

These skeptics included Dr. Robert Naman, an analytical analyst with decades of experience. But when he and his company, Analytical Chemical Testing Laboratory, Inc. (ACT), tested the samples, it removed all doubt.

The Hutchinson’s method had reduced the amount of oil and grease from 7 parts per million to less than 1 part per million. In other words, the waters they treated had contained huge amounts of oil, and now they contained almost none.

While the technology is not completely understood by the undersigned, it is clear that the process may have extreme value, and it should be given a chance to be presented and tested on a large scale basis.

Of course, people are skeptical of this experiment, and rightly so. What we need is some peer reviewed scientific evidence that 528 Hz is able to cause physiological change.

A 2019 study conducted in rats showed that sound waves at 528 Hz reduced anxiety in rats.

The study also showed that the:

This study may lead to ascertain a possible therapy in which sounds may be utilized to reduce anxiety in individual (6).

But this was in rats. What about studies in humans?

Effect of 528 Hz Music on the Endocrine & Autonomic Nervous Systems

This study took nine participants and had them listen to 528 Hz music and standard music on separate days.

The researchers measured key biomarkers of stress via saliva. These were cortisol, chromogranin A, and Oxytocin. A Profile of Mood State was also used as a subjective measure of stress, but obviously the physical biomarkers are the most scientific indication of stress.

The results were significant.

In the 528 Hz condition, mean levels of cortisol significantly decreased, chromogranin A tended to decrease, and oxytocin significantly increased after music exposure. However, no significant change was observed in any salivary biomarkers in the 440 Hz condition.

Tension-anxiety and Total Mood Disturbance scores were significantly reduced after exposure to 528 Hz music, while there was no significant difference following 440 Hz music (7).

The researchers concluded that 528 Hz music has an especially strong stress-reducing effect.

The most interesting aspect of this experiment is that the 440 Hz music, which is today's music tuning standard, had very little to no stress-reducing effect.

This begs the question: are we listening to the wrong scale?

Glen Rein, of the Quantum Biology Research Lab in New York, conducted an experiment where he exposed in-vitro DNA to different styles of music.

He converted the music to scalar audio waves and used a CD player to broadcast it to the DNA.

Rein then tested whether the music had any effect on how much UV light the DNA absorbed; DNA absorbs UV light when its helix unwinds.

The Gregorian chants, which use the Solfeggio scale, caused the DNA to absorb significantly more light. Rock music, on the other hand, had no such effect.

Though that experiment included the other Solfeggio frequencies, 528 Hz has the ability to influence DNA on its own, as its effect on water helps heal DNA helix.

In the book The Fork In The Road, biochemist Steve Chemiski stated

The late Dr. Candice Pert, an American neuroscientist and pharmacologist who discovered the opiate receptor, and the cellular binding site for endorphins in the brain, said that the energies and vibrations of these frequencies affect us on a cellular level, opening our chromosomes and exposing the DNA (9).

We have a more in-depth article on 528 Hz DNA repair here.

Dr. Candace Pert (1946-2013) has been called “The Mother of Psychoneuroimmunology”, and “The Goddess of Neuroscience”. She was an internationally recognized neuroscientist and pharmacologist who published over 250 research articles and was a significant contributor to the emergence of Mind-Body Medicine as an area of legitimate scientific research in the 1980’s.

528 Hz has mathematical significance too.

Victor Showell, a math scientist, has shown that 528 Hz is essential to the Pi, Phi, and Golden Mean that undergirds our natural world.

In partnership with acoustic researcher John Stuart Reid, Showell has also shown 528’s key role in the geometry of spirals similar to the structure of DNA (10).

In fact, the geometry of circles is not possible without 528 Hz, either, and neither is the capability to measure time and space. For instance, we even find 528 in our mile measurement of 5,280 feet.

Dr. Horowitz once predicted that, “Musicians shall remedy what ails humanity”.

And it’s the musicians that are heading the charge to bring 528 Hz back to the people that need it.

In fact, the legendary John Lennon may have paid the ultimate price in his attempts to spread the “love frequency”.

If you have ever wondered why this song is so compelling and reaches so deeply into your soul, you now know.

Conspiracy theorists suggest that this may be part of a string of behaviors that earned Lennon the ire of the military industrial complex – an informal alliance between the military and the defense industry that influences public policy, chaos and conflict – and that it was they who had Lennon assassinated.

That’s pretty heavy stuff, but it hasn’t stopped musicians from trying to share the “love”. 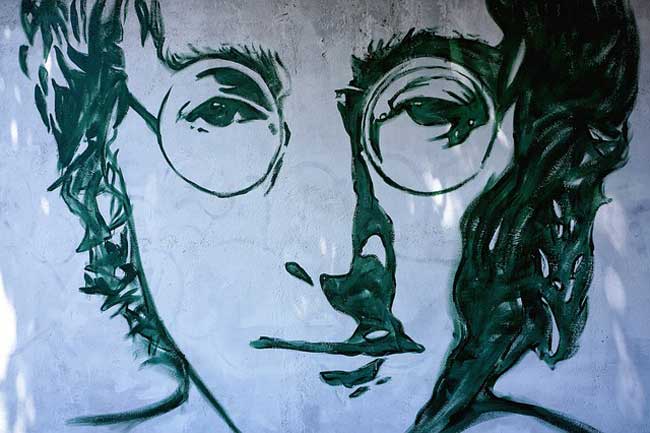 John Lennon would have be aware of 528 Hz and its potential effects when he composed his beautiful song, Imagine, using this very frequency at its core.

Others have followed suit, tuning their music to this now popular frequency. Musician Scott Huckabay performs and records all of his music with A tuned to 444 Hz, which coincides with C at 528 Hz.

Veteran piano designer and tuner Daniel Koehler has created prototype pianos that use the A at 444 Hz tuning, in an effort to demonstrate its benefits.

And we can’t forget The Live H20 Concert for the Living Water, organized by Dr. Horowitz, which brought together thousands of people to play, sing, and chant in the “love frequency” in an effort to ease pollution in the world’s water supply.

This mysterious frequency of love and miracles has the power to transform our world. Whether it’s reducing our anxiety and stress, healing our DNA, or simply spreading the frequency of love through the world..

528 resonates with nature, from the trees to the bees, vibrating at the same frequency found in rainbows and the sun.

Can you imagine a world where people lived in greater harmony, not only with each other but with our planet and all of its plants and animals?

Utopian, perhaps, but you don’t have to dream quite so big – because 528 Hz can help you now.

There are millions of people enjoying the mental and physical knock-on benefits of this frequency.

The frequencies of the ancient Solfeggio scale bring with them a consciousness shift for the listener. 528 Hz resonates inside you, opening your heart, mind, and consciousness to the depth and wisdom of the universe.

In addition to the links provided for names of cited experts and historical persons of interest, there are numbers linked in parentheses within the article. Below is a list of the reference sources those numbers correspond to.

40% off until the end of January. Discount is added in the checkout.